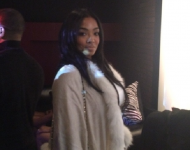 When we last saw "LHHH's" Ray J and Princess Love at the reunion show, they were back together again after a rocky few months. While in front of VH1's cameras, their relationship has always seemed volatile, and Ray's family has made it pretty clear that they are not fans of his lady. Still, these two have continued to date in spite of her threatening suicide and Ray suggesting that things in his life are not going so great. Now we are hearing that things came to a violent head in New Orleans last week, with Love being the one who was arrested for beating Ray J to a pulp.READ MORE