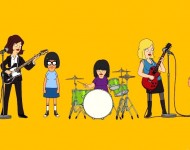 Because the world can be good and we all deserve awesome things from time to time, the women of Sleater-Kinney have teamed up with Bob's Burgers for its new music video. Today (Feb. 19), the clip for "New Wave" debuted online, and it features Corin Tucker, Carrie Brownstein and Janet Weiss traveling to the world of the Belcher clan and jamming out with Tina, Gene and Louise.READ MORE 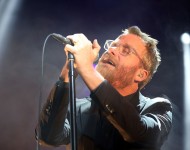 It's a holly jolly Christmas! The biggest holiday of the year is a mere two days away, and the animators from the animated FOX hit Bob's Burgers and sleepy indie rock band The National are here to spread the Christmas cheer. Just kidding... they've teamed up to release a totally bummer holiday card.READ MORE

Brooklyn rockers The National have teamed up with Fox's comedy Bob's Burgers to create a video just in time for the gravy-filled holidays, "Sailors in Your Mouth." The Thanksgiving episode aired last week. Believe it or not the video isn't entirely funny. It has its moments, but it's actually just kind of trippy. It's bizarrely entrancing, as the band (in the form of gravy) spill out of the gravy boat, captained by frontman Matt Berninger.READ MORE