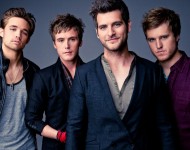 If there was ever any question about just how talented Anthem Lights is, it's now been answered. The band put together a mash-up of all of the songs in the running for the K-LOVE Fan Awards Song of the Year and it will blow you away!READ MORE

The first round of voting for the 2014 Singing News Fan Awards is now over, and the readers of "Singing News Magazine" have cast their votes for who they think the top 10 nominees in each available category are. READ MORE

The nominees for the 2014 K-LOVE Fan Awards have been announced. Voting starts on May 1, 2014 with the winners being announced on June 1 at the K-LOVE Fan Award Weekend in Nashville.READ MORE