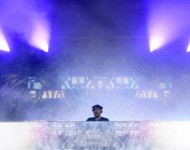 Pryda fans rejoice, for Eric Prydz will be back on the road again to close out the winter. The "Every Day" producer just announced his "Generate" tour, named after an upcoming single of his that will take him across the United States exclusively to small clubs. Eric Prydz is no stranger to club shows, which is where he got his start in small Stockholm clubs, playing for only a hundred or so people alongside guys like Steve Angello and Axwell. He continues to play small clubs, but with his EPIC — Eric Prydz in Concert — concept live show becoming more popular, Prydz has opened up to larger venues, most notably in September, taking over Madison Square Garden with 4,000 visuals and the largest indoor hologram ever used. Prydz will be hopping on his bus — he does not like flying — and crisscrossing North America, playing clubs in Austin, Detroit, Denver, Chicago, New York, Los Angeles and finally San Francisco, according to a press release. Prydz will be playing extended sets at each of the stops along the way, allowing him to dive deep into his extensive discography and multiple monikers, which includes Eric Prydz, Pryda and Cirez D. To see what is in store for you, check out his new Essential Mix back-to-back with Jeremy Olander and his live set from Hard Day of the Dead alongside deadmau5. Check out the dates below and get tickets from your local venue. Stream his three-hour live set from MSG below.READ MORE