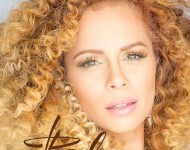 Big Daddy Weave is on the road with Group 1 Crew and Tim Timmons for the second leg of The Only Name Tour.READ MORE