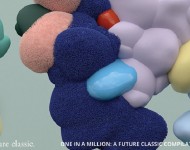 There are few artists in the dance world as hot as Australian producer/DJ Harley Edward Streten, known professionally as Flume. He brought that heat up the UK and the BBC Radio One airwaves on Wednesday night on Annie Nightengale's show. His "Quest" mix is influenced by his first trip to Tokyo and is his soundtrack to that trip.READ MORE