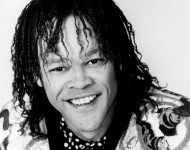 Johnny Kemp, the Bahamanian vocalist responsible for the Billboard Top 10 single "Just Got Paid," was found dead last week in Jamaica, according to reports (from CNN). Drowning is believed to be the cause. There are mixed reports on how old the performer is, with some claiming the vocalist was 55 while others imply he was 54.READ MORE