Ahead of YRN: Tha Album, the Migos decided to remind everyone of their notable street cred on a new song titled "Real Street N*gga."READ MORE

Following the announcement of a July release date, the Migos have revealed the artwork for their forthcoming project, 'YRN: Tha Album.'READ MORE 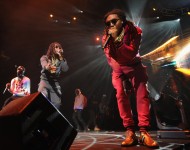 Migos have an album, 'YRN Tha Album,' coming this June, and in preparation of that this May the "Versace" trio will be heading out across the United States for an extensive Yung Rich Nation tour. OG Maco of "U Guessed It" fame will support the tour. It will take the Atlanta rap trio all across the country to music hot spots like New York City, Philadelphia, New Orleans, Detroit, Houston, San Francisco and Los Angeles, as well as smaller markets like Raleigh, Salt Lake City, Cleveland, Santa Ana and Birmingham.READ MORE

After announcing that their debut album was finished Monday, March 9, Atlanta rap trio Migos sat down with 'The Fader' today, March 11, to divulge details about the release date, the correct name and who will be featured on the LP. 'YRN Tha Album' will be released June 16 and will feature Chris Brown, Lil Wayne and Meek Mill.READ MORE