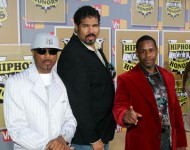 Sugarhill Gang founding member Henry "Big Bank Hank" Jackson died today (Nov. 11) at the age of 57. The New York rapper suffered kidney complications due to cancer, which he had been battling for some time, according to Fox News. Jackson formed the Sugarhill hang with Master Gee and Wonder Mic and recorded the hit 1979 song "Rapper's Delight," which is largely regarded as the first rap record and sold several million copies worldwide, establishing rap as the mainstream genre it is today.READ MORE