Selena Gomez has returned with another music video as she teamed up with Colombian singer Camilo for her latest Spanish single, "999."READ MORE 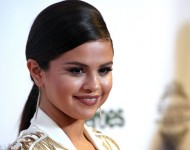 Selena Gomez has to be one of the busiest starlets in young Hollywood right now. She has two movies set for release later this year and then two more coming in 2016. Plus there's that labor of love that she has been working on for quite awhile now, her fourth studio album. While her schedule seems to be booked pretty solid, everyone's favorite momager, Kris Jenner, has been trying to persuade Gomez to take on another project, her own reality show!READ MORE