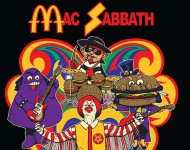 If you have ever been hungry and ready to mosh at the same time, Mac Sabbath might be your new favorite band. The quartet dresses like characters from McDonald's and performs parodies of Black Sabbath songs. These guys were either bored or hungry when they came up with this idea, but we are glad they did. The band takes heavy metal classics like "Iron Man" and "Paranoid" and changes them into "Frying Pan" and "Pair-a-buns," "MTV News" notes. "I once burned your meal / My old job was cooking veal / Now it's a culinary crime / All our future is pink slime," the Ronald Osbourne frontman sings. Demented versions of Grimace (Grimalice), Hamburglar (Catburglar) and Mayor McCheese (Slayer McCheese) all play in the group as well. The band's Facebook page lists their brand of music as "Drive Thru Metal." They even have a little bit of a Gwar storyline, according to the bio:READ MORE 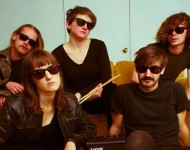 Macaulay Culkin's band, The Pizza Underground, has released a music video and is touring.READ MORE

Well most of us know Macaulay Culkin from Home Alone and its New York-set sequel. And as much of this might be a stretch, there is a familiar scene in Lost in New York when a remarkably and unrealistically lucky Kevin McCallister happens to have a suite in a luxury hotel and is greeted outside at his limo before toy shopping with his "very own cheese pizza."READ MORE