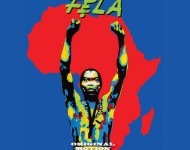 Directed by Academy Award-winner Alex Gibney (Taxi to the Darkside, Enron: The Smartest Guys in the Room), the film takes a deeper look into a story told by the three-time Tony-winning musical FELA!, which had its Off-Broadway premiere in 2008--recently revived on Broadway in 2012.READ MORE