The 22-year-old beauty opened up about going on tour with rap star Nicki Minaj after originally signing up for Iggy Azalea's tour, getting a co-sign by rapper Kanye West, the difficulties of managing her busy schedule and dating life.

Tinashe appeared on stage refreshed and filled with positive vibes as she celebrated her first platinum track. The extremely busy and hardworking star admitted that she is strictly focused on her work and shared that this summer she will be joining international superstar rapper Minaj on tour.

"I have not met her yet. I'm looking forward to that introduction. It would be very -- 'I wanna squeeze her boobs and I hope she lets me cop a feel. She can squeeze mine too... but super excited to meet her and finally get that introduction obviously I'm a fan and really excited to be a part of the tour." 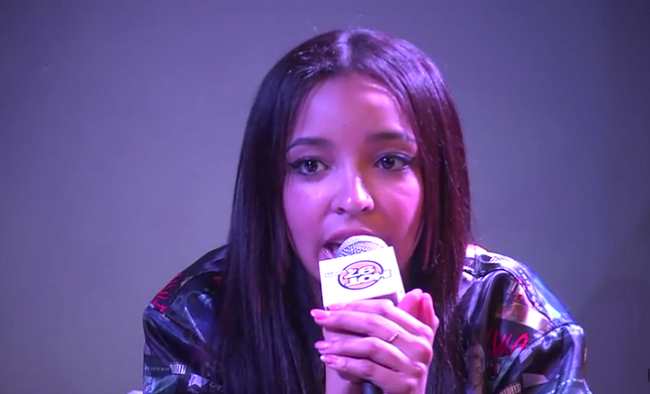 The actress said that her summer was cleared after Iggy's tour was pushed back, but her team managed to get her schedule packed with the pink Barbie, "I think her management reached out to be a part of the tour and that was pretty quickly after I found out Iggy's tour was postponed- that I was originally gonna go on this summer. So I was like 'hey that works out, that work out quite nicely."

It seems Nicki wasn't the only one aware of Tinashae's star quality. Recently, the uprising star received a tweet from mega- rap star, Kanye West who posted her music video "All Hands On Deck" captioned, "I really like this vid."

Now, flabbergasted by the tweet, she recalled that she didn't believe it was real when she first got the news, "I was in the studio. I'm working on new music. I'm working on my second album. So I was in the booth, I was on my focus s**t." she joked. "My brother texts me and it's a screenshot of the tweet and at first I thought t it was like Photoshop. I thought someone had doctored up some image. I was like 'wait a minute, this is like a real tweet.'" She gushed on the white couch, "This is actually crazy. So I had to stop singing for a second and was like 'hang on you guys Kanye just tweeted my music video. We have to stop, we have to cut!'" she added, "I've never met him. Another person I'm looking forward to meeting."

In February, the young star was caught in a rumored love triangle between singer Ciara and rapper Future after gossip sites reported that she was caught in a "compromising position" with the Karate Chop artist. Tinashe denied the reports via twitter.

"Haven't seen or spoken to Future we recorded our song together in 2013," she tweeted.

"It's a weird feeling waking up to completely 100 percent made up and UNTRUE rumors, and people believe them! LOL Gonna take some getting used to!" she added, "Sorry I usually don't speak on nonsense but it just bothers me to be known as something I am completely not. I will try 2 remain positive."

During the interview she revealed that there were a few men in the industry that caught her eye, but says she's too busy for the not-so-friendly men, "I would not be opposed if someone came up and really sparked my interest. I'm not anti-dating, anti-relationships but I'm definitely not gung ho to be getting into a relationship. I'm really focused, I'm busy, and I have a lot of stuff to do."

One fan shouted "Has anyone sparked your interest? Tinashae answered, "Maybe for like a day or two, but after - I hate to put them all on blast and to label them all, because I haven't spoken to all the guys in this industry, but all the ones that I've come across thus far, they're just not good guys.

Check out the interview here: