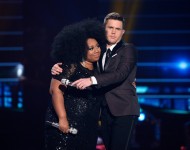 Trent Harmon may have taken home the final (...for now) American Idol title on Thursday night (April 7), but he wasn't the only winner. La'Porsha Renae came out on top, too, with a recording contract all her own.READ MORE

So, this is it. The final American Idol performance round (for now, once again). On Wednesday night (April 6), the final three (La'Porsha Renae, Trent Harmon and Dalton Rapattoni) were narrowed down to the final two - and honestly, it's a battle to the finish.READ MORE 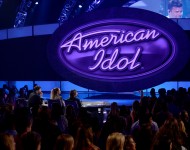 The end of American Idol (for now) is ever-so near. On Thursday night (March 31), the final four was narrowed down to the semi-finalists: Dalton Rapattoni, La'Porsha Renae and Trent Harmon. And they're, let me be the first one to say this, in it to win it.READ MORE

There are only two weeks left for American Idol ever, and the emotions are going to be running rampant on Thursday night (March 31). On tonight's episode, the Idol season 15 top four will show off their hometown visits and perform three songs - a pick from mentor Scott Borchetta, a song chosen by the judges and a dedication for their hometowns.READ MORE

American Idol's farewell season has given us solid performances fairly consistently, without making any of the individual singers step out of their comfort zone too much... that was, until this week. Despite having the broad genre definition as "classic rock songs," which could have spanned about 50 years of popular music, the song choices were so off, and the performances heavily reflected that.READ MORE

American Idol's 15th and farewell season got a visit from one of its most noteworthy alumni on Thursday night (March 17) when Adam Lambert returned to the show to debut his new single "Welcome to the Show." And it was, indeed, welcome to the realities of show business for the top six, who were thrown a major loop when America picked its song choices.READ MORE

Every year, the judges and guest stars and everyone else on American Idol claim the current crop of contestants is the strongest ever. It's the sort of statement that is hard to believe, no matter how great a group may be. But in the show's farewell season, which was narrowed down from eight to six singers on Thursday night (March 10), calling this group unbelievably strong may just be accurate.READ MORE 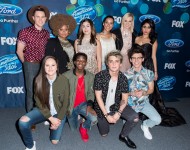 American Idol's farewell season will finally get to the meat this week... the voting rounds. After weeks of Hollywood performances and judge's picks, the top 14 will finally get to be put to the real test (after a little more help from the judges).READ MORE

American Idol's premiere week continued on Thursday night (Jan. 7) as the judges and the entire show's cartel moved on to Little Rock and San Francisco. This episode, logically, had less of a nostalgia factor and less hype surrounding it than Wednesday night's proper premiere, but the talent was far more consistent and impressive. There were plenty of Top 24 contenders in the mix.READ MORE