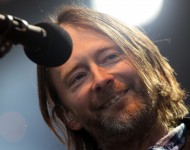 Taylor Swift has become the figurehead of the anti-streaming movement in the last year thanks to pulling '1989' and the rest of her discography from Spotify during 2014, but Radiohead's Thom Yorke has hated the concept longer and more deeply than anyone. Yet Stereogum (as well as the rest of the world) was shocked to find that the frontman's solo discography was ready for streaming on Apple Music.READ MORE 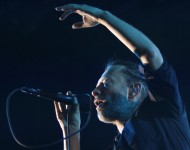 This past weekend, Radiohead frontman Thom Yorke stirred up some wild speculation when he posted a photo to his Tumblr of a white 12-inch record on a turntable, which was reposted through Radiohead’s own Tumblr and by the band’s producer Nigel Godrich. Though it still isn’t clear as to what this mysterious record might be, Yorke has provided some more possible clues this morning (Sept. 23) through his Twitter account by posting photos of a lyric sheet and some artwork.READ MORE

Thom Yorke's Mysterious White Record: 7 Guesses About What It Might Be

Yesterday, Radiohead frontman Thom Yorke caused a frenzy amongst his fans by posting a mysterious photo of a white 12-inch record, which was reposted by Radiohead producer Nigel Godrich. Nobody's quite sure what this record could be, though here are some educated guesses:READ MORE 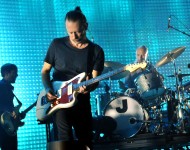 In a recent interview with BBC 6 Music, Radiohead drummer Phil Selway heightened the already insurmountable hype that inevitably goes along with any new Radiohead album by revealing that the band's best album is "yet to come."READ MORE 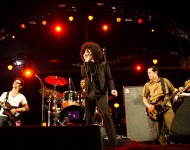 NME recently talked to Paul McCartney about modern day artists he would like to collaborate with. Among those he named was Thom Yorke. He revealed in the interview that he would be nervous to call up the Radiohead/Atoms for Peace frontman. Yes, former Beatle, the Macca, is afraid to be rejected by Yorke.READ MORE

Atoms for Peace Make TV Debut on The Daily Show, Play 'Default' Off 'Amok' and "Harrowdown Hall' Off 'The Eraser' [WATCH]

Thom Yorke (Radiohead) and Flea (Red Hot Chili Peppers) from and Atoms for Peace stopped by The Daily Show with Jon Stewart last night to promote their world tour and make their television debut. The band, which also includes Nigel Godrich (Radiohead), Joey Waronker (Beck, R.E.M.) and Mauro Refosco (For in the Dark), released its debut album, Amok, back in February.READ MORE

In a social media-driven world, it's easy for artists (and anyone really) to go on a seemingly impromptu rant about any issue. Thom Yorke and Nigel Godrich, two of the big names behinds bands like Radiohead and Atoms For Peace, released a lot of pent up frustration with music streaming service Spotify on Sunday, and the organization got back to them pretty quickly.READ MORE