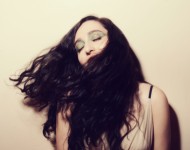 Brooklyn-based singer-songwriter Sarah McGowan started writing songs at the age of 14 in her hometown of Darien, Connecticut. After composing an original piece of music and performing it at her high school, she began to pursue music as a potential career and has since evolved her sound from Taylor Swift-inspired pop to a dark, folk style. She completed her degrees in Music and Spanish at NYU in 2014 and just released her first EP, Indian Summer, last month.READ MORE