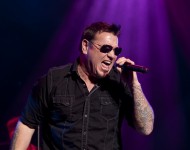 We know you didn't ask for it. We know you probably didn't even consider this a possibility, but this week we were treated to a cover version of the Queen and David Bowie song, "Under Pressure," released by Smash Mouth. Shared online as a tribute to the late, great Bowie, this cover sounds as you would imagine a cover from the '90s pop rockers would sound like - which leaves the judgment up to you! Listen to the cover below. It's from the Zoom soundtrack, by the way.READ MORE 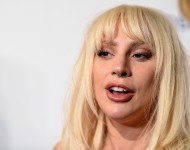 Since his death this past Sunday (Jan. 10), a number of artists have come out to speak out the inspiration that they gained from David Bowie, the latest being 'Artpop' Queen Lady Gaga herself. There are some obvious comparisons stylistically between Gaga and Bowie, which came to light in the interview amongst commentary on her new song with Diane Warren.READ MORE 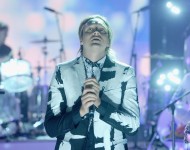 Arcade Fire Release Statement on David Bowie's Death: "A True Artist Even in His Passing"

David Bowie was one of the earliest fans of Arcade Fire, and now the band has returned the support in kind. Following the shocking news of the rock icon's death on Sunday (Jan. 10), Win Butler and co. released a touching statement on Bowie's impact on their music and his legacy.READ MORE 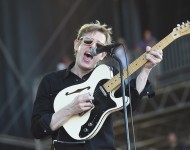 The world is still mourning the death of David Bowie. In the days since he passed away at the age of 69 years old, 3 days after his birthday and the release of his 2016 album, Blackstar, celebrities have revealed touching stories of the musician's personal life and their respective friendships. In Bowie's hometown of Brixton, London, fans celebrated his life and music in a moving tribute from crowds of hundreds and hundreds of people. Watch videos of the fans singing "Starman," "Life on Mars," and "Let's Dance" below, and try not to sing along.READ MORE 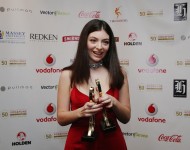 Artists and fans such as Paul McCartney, Kanye West, Madonna and Brian Eno have been giving their well-wishes to Bowie's family and sharing touching stories about how the pop culture legend impacted them. Lorde is the latest, recounting the first time she ever met him.READ MORE 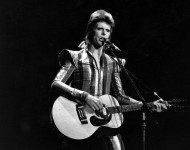 Kanye West, Lupe Fiasco and others from the Hip Hop community express their feelings over the death of rock icon, David Bowie.READ MORE 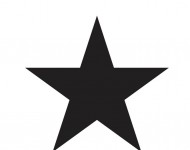 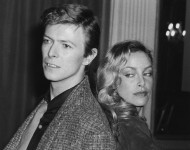 The music world is mourning the loss today of one of the all-time greats, David Bowie who died at the age of 69 after an 18-month-long battle with cancer. The outpouring of support has been felt by those who knew him personally and worked alongside him all the way to those who are just being introduced to his music now. Brooklyn and UK based record label, vinyl store and concert space Rough Trade is now paying their respects to the legend by donating all profits from his music to cancer research.READ MORE 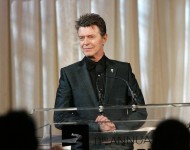 With his untimely passing last night, it’s safe to say that friends, family and fans of music icon David Bowie have been finding solace in his art, primarily his last album Blackstar released this past Friday January 8th on his 69th birthday. Blackstar producer Tony Visconti took to Facebook today to confirm that this was Bowie’s plan all along, and that the album was created as a “parting gift” to fans.READ MORE 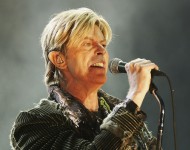 David Bowie surprised the world one last time by passing away on Sunday evening (Jan. 10) after an 18-month battle with cancer. In his 69 years on Earth, the revolutionary pop culture legend had inspired countless other musicians and actors, and in the wake of his death, everyone from Madonna to Kanye West to Paul McCartney mourned on social media.READ MORE 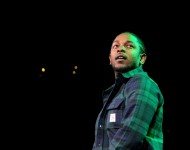 Each and every week we put together our favorite tracks that had premiered a few days prior into one magnificent mixtape to share with you and your friends. This time around we've decided to share new 2015 songs from Kendrick Lamar, David Bowie, RJD2, Yeasayer and more right here!READ MORE 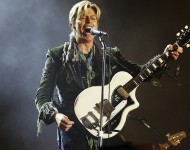 It is with great sadness that we report David Bowie, who had just celebrated his birthday, has died yesterday at the ago of 69, after an 18-month-long battle with cancer.READ MORE 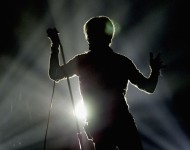 Does David Bowie's ★ (Blackstar) Mark a New Music Trend of Jazz Rock for 2016?

David Bowie's ★ (Blackstar) sets a high benchmark for the year, but to fully appreciate its influence and the tone it sets for 2016, we need to look back first.READ MORE 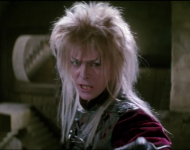 Today is David Bowie's 69th Birthday, and also the release date of his highly anticipated new album, Blackstar. Bowie is an entertainment icon that has wowed us with some of the best music, strangest looks and groundbreaking performances over the years, but we want to take a look at his acting career. While David has shown up as himself in cameos in a number of movies, the films featuring his thespian talents are just as interesting as the man himself. Below, we've picked out 6 of David Bowie's best roles that you should check out on his Birthday today!READ MORE