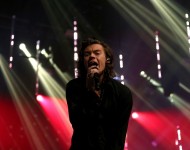 Yesterday (March 25), the One Direction fandom was rocked when founding member Zayn Malik announced that he was quitting the "Night Changes" boy band after five years. And now, new rumors are surfacing that he's not the only one with a desire to leave the group... could Harry Styles be eyeing an exit to pursue a career in Hollywood and a solo music stint?READ MORE 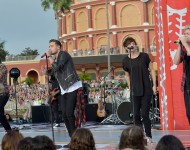 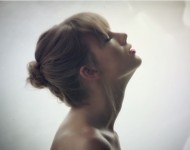 Taylor Swift is taking her love of all things glamorous and Tumblr and bringing it ­into her music videos. Today (Feb. 13), just in time for Valentine's Day, Swift dropped the new music video for her latest 1989 single, "Style," and it features a very big wink at her relationship with ex-boyfriend and One Direction heartthrob Harry Styles.READ MORE 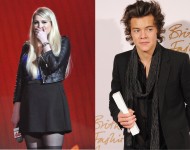 Meghan Trainor Recorded Duet With Harry Styles, "All About That Bass" Singer Calls One Direction Heartthrob "An Incredible Writer"

Meghan Trainor has revealed she teamed up for a duet with none other than One Direction heartthrob Harry Styles, British newspaper The Sun reports. The song they wrote together was called "Someday Maybe," however with Styles' 1D duties, it might not be released until he is no longer committed to the group.READ MORE 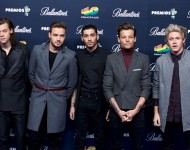 One Direction fans have always known how to make a lot of noise on Twitter - barely a day goes by without at least one 1D-related topic trending on the social media site. And now, one of Louis Tomlinson's tweets from 2011 has become the second-most re-tweeted message of all time, surpassing a big message from President Barack Obama.READ MORE 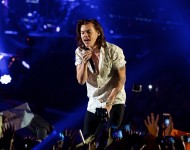 Oh, that Harry Styles. He's quite the charmer. After he and his One Direction band mates performed their new singles "Night Changes" and "Ready to Run" on Saturday Night Live this weekend, the boy bander got down pretty hard with comedienne Kristen Wiig at the SNL afterparty, even dancing to that 1980s Dirty Dancing classic "(I've Had) The Time of My Life."READ MORE 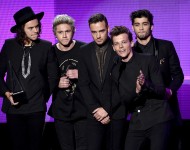 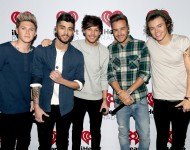 The Taylor Swift - Harry Styles relationship captured the hearts of millions, hoping for something lasting from two good-looking and incredibly talented pop stars at the top of their game. Since their break up, Harry Styles can't seem to escape Taylor's song writing and has been a common theme in her recent work. Now in a recent Google hangout led by director Ben Winston, producer of last year's One Direction documentary One Direction: This Is Us Harry was posed the question about his inclusion in her songs and he had the chance to respond.READ MORE 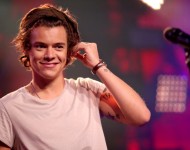 Harry Styles Says Gender Is "Not That Important" To Him In A Relationship, Reignites Bisexual Rumors [WATCH]

Harry Styles, being the teen heartthrob that he is, often has his sexuality and his relationships scrutinized by the media and even his fans. He's dated the likes of Cara Delevigne, Taylor Swift, and Kendall Jenner, but in a new interview with On Demand Entertainment, the One Direction singer playfully confirms that gender isn't a deciding factor in his romantic endeavors.READ MORE 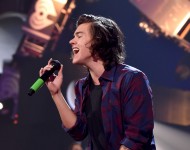 Harry Styles & One Direction Fanfiction 'After' Gets Movie Deal with Paramount

First, the Harry Styles fanfiction After was being optioned into a book by Simon & Schuster, and now it looks like the saucy story will be following 50 Shades of Grey's path to the big screen. Today (Oct. 17), it was announced that Paramount has acquired the film rights to Anna Todd's sexual One Direction-inspired story for a new movie.READ MORE 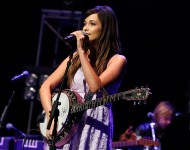 One Direction's Harry Styles Is A Big Fan of Kacey Musgraves

Yesterday we reported that Hilary Duff wanted to do a duet with Harry Styles, but today we've caught wind that the One Direction heartthrob might have his eyes on another female artist: Kacey Musgraves. Styles took to Twitter yesterday afternoon to share his current guilty pleasure.READ MORE 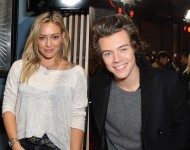 Harry Styles And Hilary Duff Duet? "Chasing The Sun" Singer Wants To Record Song With The One Direction Heartthrob [WATCH]

It has been seven years since Hilary Duff dropped an album, but she is hard at work on her fifth studio effort. She has already released its lead single "Chasing The Sun" as well as the second single "All About You." She recently detailed the progress of the new record with MTV, assuring fans it is "pretty much done."READ MORE 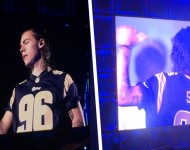 Although it's already the No. 2 selling jersey among 2014 NFL rookies, the Michael Sam #96 Rams jersey will probably get another sales boost thanks to Harry Styles. The One Direction singer showed his support for Sam at a concert in St. Louis, where Sam plays for the Rams.READ MORE 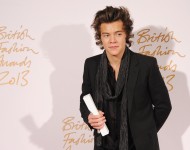 Harry Styles Leaving One Direction? Pop Star’s Rep Sets The Record Straight On Outside Collaborations with Kodaline and Ariana Grande

Rumors of the One Direction star going solo have been swirling around the Internet, with fans going bonkers over what will or will not happen to their favorite boy in their favorite boy band. But now, Styles’ reps are speaking out.READ MORE 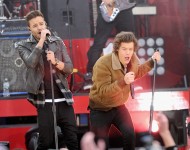 One Direction members Harry Styles and Liam Payne may or may not know the alphabet, or so it seems in an adorable new video from the set of Sesame Street. Nearly five months after the "You and I" boy band first appeared on the children's show, new footage of Styles and Payne singing the ABCs with Bert hit the web, and it's predictably very cute.READ MORE