Beyoncé's new album was totally unannounced, plus it came out on Thursday versus the traditional Tuesday release, plus it was only available on iTunes, so there's no way that it could have made a big Billboard 200 impact, right? HA. READ MORE

R. Kelly to release a XXXmas album in 2014 called '12 Nights of Christmas'

Following the release of his latest album, Black Panties, R. Kelly has announced a new album for 2014, an XXXmas record (if you will) called 12 Nights of Christmas (maybe this one will have a song called "Christmas Cookie!"). In an interview with Rap-Up, he has been working on the album for more than a year, and it should be ready for release during the 2014 holiday season.READ MORE

R. Kelly's Black Panties was released today via RCA. Now the video for the album's latest single, "Cookie" has premiered as well.READ MORE

Lady Gaga's new album "Do What U Want" is well on its way to being the next hit single from the Mother Monster's most recent album "Artpop." Of course, the super-sexual single (featuring none other than Mr. Black Panties himself R. Kelly) should get a super skeezy, hyper sexy music video to match.READ MORE

Last night R. Kelly stopped by The Arsenio Hall show to chat about his new album. But things changed when the news of Nelson Mandela's death broke. Hall and Kelly reminisced about meeting the legendary and inspiring leader then dedicated the show in his honor. A short montage aired prior to Kelly's musical performance, where he played "Soldier's Heart," a song he wrote about Mandela and performed for him back in 2009.READ MORE

R. Kelly announces new 'Trapped in The Closet' episodes for 2014, to air on IFC

R. Kelly is ending the year with a bang, having guest starred in a single by Lady Gaga and releasing his own album Black Panties December 10. However, the most exciting announcement from the R&B star has to be that new episodes from his ongoing hip-hopera Trapped In The Closet will air on IFC during 2014. READ MORE

It's only been a year and a half since R. Kelly's last album "Write Me Back" arrived in stores, but now the R&B powerhouse is back with his twelfth studio album. A little over a week before its planned Dec. 10 release date, Kelly's new record "Black Panties" has leaked in full and is now available to stream online. READ MORE

R. Kelly and 'Sex Dolphin' get remixed to include backing track [LISTEN]

R. Kelly has been all over the news in the last week, both for his forthcoming album Black Panties and the racy content/album art on the record. Nothing has gone more viral than the songs he improvised for Rolling Stone yesterday, taking given phrases including "sex dolphin" and "Italian hero sandwich" and turning them into bedroom jams. His great voice, coupled with the absurd content, has the potential for a Ylvis-type hit, but unfortunately there were backing beats to go with the song. Until now. READ MORE

Rolling Stone got R. Kelly to do something pretty awesome the other day. They gave him four random phrases and asked him to make a song out of it. Now, this being R. Kelly, we knew sex was going to have to play a role in these little tunes.READ MORE

R. Kelly's "Black Panties" is getting ready to drop. After the album faced a month-long delay from its original Nov. 11 release date, it seems like the R&B legend's 12th studio album will actually premiere on Dec. 10. With that day coming closer and closer, it's just about time that the album cover and full tracklisting are revealed, and Kelly did just so last night via Rolling Stone.READ MORE

Unlike the unnamed lead character in the classic children's book Green Eggs And Ham, who does not want his breakfast in a box, with a fox or anywhere, for that matter, Justin Bieber is up to "put you down" wherever he can. The Biebz cannot wait to reach the bedroom (though when he does, it's adorned with candles); he'll go on the coffee table, in a plane, on a train or in an automobile. Thus begins the seventh installation of Bieber's Music Mondays series, "PYD."READ MORE 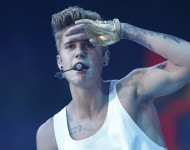 It's the end of yet another week, and that means that Justin Bieber has announced his new Music Mondays single. The seventh installation of his series will be called... "Alone." READ MORE

Justin Bieber is budding on his own career in R&B. The maturing teen idol has been releasing a slew of sizzling adult jams during his Music Mondays campaign, including tracks like "Heartbreaker," "Recovery" and "All Bad." Now, a collaboration with one of the biggest names in R&B has been confirmed: the Biebz will release a song with the legendary R. Kelly (and also possibly Drake) next week.READ MORE 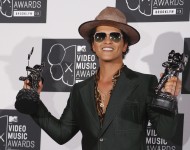 There were never any real doubts that Bruno Mars' latest "Unorthodox Jukebox" single "Gorilla" was about raw, down and dirty sex. It's right there in the chorus -- "You and me baby, making love like Gorilla" isn't very subtle. But now, the song has reached a whole new level of naughty with a "G-Mix" done by the always saucy R. Kelly and none other than mega-producer/"Blurred Lines" collaborator Pharrell.READ MORE 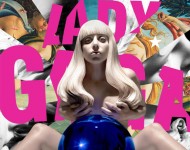 Last night, Lady Gaga teased the ARTPOP song "Do What U Want" in a Best Buy ad for Beats by Dre studio headphones. The 30-second clip features R. Kelly and Gaga going back and forth over a smooth R&B backbeat.READ MORE