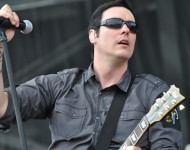 Music Times had the chance to chat with rockers Breaking Benjamin about its new lineup and new album Dark Before Dawn (available June 23) at the Rock On The Range festival this weekend. We tried not to Saturate (see what we did there?) the conversation with questions aimed specifically at frontman Benjamin Burnley but things swing that way anyhow. He and his bandmates discussed current single "Failure," leeches, covering Weezer and Ed Wood movies.READ MORE