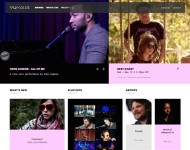 Starting a streaming service in 2014-2015 is the new trendy thing to do it would appear. However, most companies that set to create a new app or technology that will revolutionize the music business start with their technology and platform and then work to secure the content. This has left others like TIDAL in trouble who have the infrastructure in place, but are still securing the content through various deals. A new service was launched today titled VuHaus by the most unlikely of candidates, public radio stations all across the United States. Unlike its counterparts, it starts with the content that comes daily from its radio affiliates all over the country and has built out the technology from there.READ MORE