The season finale of America’s Got Talent aired just last night (Sept. 17), and to celebrate the show’s end (just this season, of course), Ed Sheeran stopped by to perform his hit “Don’t” off of his latest album x.READ MORE 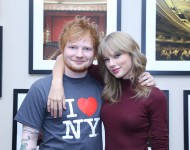 Ed Sheeran has kept fans guessing when it comes to that little ditty called "Don't." In a recent chat with Howard Stern, Ed gave up just enough information for fans to start to put the mystery together pretty solidly. Sometimes the only thing better than a great set of lyrics is being able to read between the lines and figure out who the artist is singing about, right?READ MORE 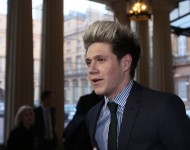 Niall Horan of One Direction Injured at Amsterdam Concert, Asks Fans on Twitter Not to Throw Things Onstage

One Direction fans love their boy band so much they can't even keep their shoes to themselves, much to the detriment of the "You and I" group. Last night (June 25) at a concert in Amsterdam, 1D member Niall Horan was hit in the knee with a heavy object, adding pain to an old injury. Now, he's made a call on Twitter for fans to be careful at future gigs.READ MORE 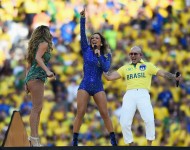 10 Musicians Who Are Celebrating The 2014 World Cup: Justin Timberlake, Rihanna, One Direction, And More

The 2014 World Cup is in full swing. With celebrities getting excited for tomorrow's game between The USA and Germany, we wanted to find out which musical acts are staying tuned to what's happening down in Brazil.READ MORE 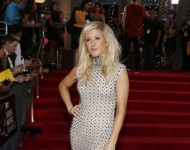 Ellie Goulding added to and started some rumors during the 2013 MTV Video Music Awards over the weekend when she sat with two of music's biggest heartthrobs, Niall Horan of One Direction and Taylor Swift's BFF Ed Sheeran. Goulding, 26...READ MORE

Taylor Swift loves to bring out special guest performers on during her concerts. Earlier this week, she had Canadian sister singers Tegan and Sara come out and perform their hit "Closer" to an excited crowd. Her latest special guest... READ MORE 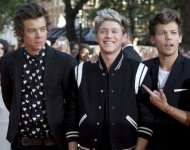 Niall Horan might have cryptically confirmed his rumored relationship with Ellie Goulding. The two were allegedly spotted sharing a kiss or two at last weekend's V Festival in Hyde Park, this starting a huge uproar of gossip and... READ MORE 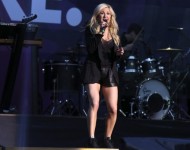 Over the weekend, One Direction's Niall Horan was reportedly spotted kissing singer Ellie Goulding at the V Festival in Hyde Park. Neither side has confirmed or denied the rumor, but that doesn't matter to 1D fans. Just like any other...READ MORE

Last night was the premiere of One Direction: This Is Us but Niall Horan was not seen with a date on the red carpet or heading to the after party. In fact, Horan spent his night on Twitter thanking his fans while his band mates...READ MORE 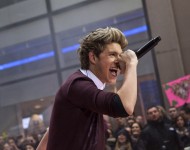 Remember when Niall Horan of One Direction was straight up flirting with singer Ellie Goulding on Twitter over the last few months? Well it apparently paid off because sources claim that the "Best Song Ever" singer was spotted locking...READ MORE

Just a few days after One Direction's Niall Horan blasted the rumor involving spending the night with "Made In Chelsea" star Louise Thompson earlier this year, the two rumored lovers were spotted at the Virgin Media V Festival. Sure it's...READ MORE 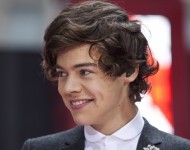 One of the biggest dating and/or hook up rumors involving the biggest boy band in the world, One Direction, has to be the story of Niall Horan allegedly spending a night with "Made In Chelsea" reality television star Louise Thompson...READ MORE

Earlier this week, One Direction's Irish crooner Niall Horan did a special live Twitcam Q&A with fans. Broadcasting from his home, the "Best Song Ever" singer answered many questions that weren't really groundbreaking in any way...READ MORE

One Direction's Niall Horan recently revealed that he would absolutely date one of his millions of fans if the right one came around. This of course is not news to us considering he met his last girlfriend, model Zoe Whelan, at a One... READ MORE