Last year, DJ Joel Zimmerman, a.k.a. Deadmau5, applied to trademark his notorious mouse head logo. As Billboard notes, the logo is a caricature of a mouse head with black ears, a black face, white eyes and a white mouth. If registered, the branding would cover all merchandise, including electronics, toys, drinks, vehicles (specifically BMX bikes), paper goods, leather goods, sporting goods, staple foods, light beverages and entertainment services. But there's one entity that might get in his way: Disney.READ MORE

Blizzard, the creators of the Diablo series, have slipped an easter egg referencing the producer into Reaper of Souls, an expansion for Diablo III. READ MORE

Either Skrillex and Deadmau5 are actually the same person, or maybe the former just got a helmet to look like the latter. READ MORE 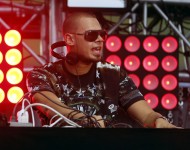 Afrojack, Above & Beyond and W&W doing Hakkasan residencies in Las Vegas during 2014

One of our big points when analyzing Forbes' list of the highest-paid DJ's of the previous year was noting that many of the big money-makers were affiliated with Las Vegas nightclub Hakkasan, the star player in a city filled with star players. The club, part of the MGM Grand, welcomed in even more big names for residencies during 2014. READ MORE

The increasing profitability of EDM has been a theme throughout the year in both Music Times as well as numerous financial publications. Many businessmen and promoters are looking to make a buck off the trend, but one the producers themselves are definitely cashing in, as Forbes' list of the highest paid DJ's indicates. Calvin Johnson topped the list for 2013, bringing in more than $46 million (a total that topped Jay Z's earnings for the year). READ MORE

Those who were looking to get torn up while celebrating the end of 2013 with Deadmau5 got a shocking e-mail prior the DJ's New Year's Eve show: No alcohol would be served at the event, held at Nassau Coliseum on Long Island. READ MORE

Electronic music producers and DJ's double down on enjoying the holiday season. First they get Christmas, and then they get New Year's Eve, which is like Christmas to the electronic music industry. Nearly every DJ is getting paid plenty to appear at exciting locations and party down with us as we ring in the new year. Music Times took the Top 25 DJ's in the world (according to DJ Magazine) and found where they'll be on December 31 this year. READ MORE

One of the most hyped-names in EDM music, or any music for that matter, has finally found a home label. In fact, house producer Porter Robinson ended up choosing Astralwerks to avoid the focus on EDM. READ MORE 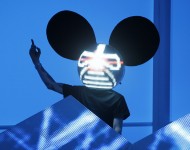 New Year's Eve: Deadmau5, Hardwell, and Zedd have plans. Will you be near?

It's a little early, but those on top of the game are already planning for New Year's Eve. The night is especially huge for EDM fans, as the world's top DJs usually find a swinging party to settle down for. Deadmau5 just announced where he'll be (see below), but many of the biggest names still haven't told the world their plans, or whether you'll be able to join them. For now, check out what five big names are doing, and whether you're close enough geography-wise to join them. READ MORE

Flo Rida vs. Deadmau5 in the battle of the Beamz

A hot trend right now in hip-hop is to have your own headphone line. Dr. Dre and Ludacris are making healthy profits off their respective Beats by Dre and Soul lines. Flo Rida, in a new development for the rapper, decided to take things in a different direction: a portable, laser-powered remix machine called Beamz by Flo (so the title might not be that original).READ MORE

The 20th annual DJ Mag Top 100 DJ's in the world poll results have been released, and there's a new name on top. Hardwell, a Dutch house DJ, has become the youngest victor ever at the age of 25, displacing his fellow countryman Armin Van Buuren in the process.READ MORE

In a segment vaguely similar to Jerry Seinfeld's Comedians in Cars Getting Coffee, Deadmau5 now has his own driving-to-get-coffee show on YouTube called "COffee RuN." It has a similar premise to Seinfeld's show: two celebrity buds go grab a cup of coffee and chat.READ MORE

If you think you haven't heard much from DeadMau5 (born Joel Zimmerman) this year, get ready for 2014. EDM's bobble-headed DJ has been hard at work producing new material, according to Rolling Stone.READ MORE

HARD's Day of The Dead electronic music festival may be taking place a a little later than the actual Day of The Dead, but the organizers have gathered quite a lineup to make up for the fact. The event will go down at L.A. State Historic Park in Los Angeles during the weekend of November 2 and 3. The festival's website released the lineups of each of the four stages on Friday, all presented on some pretty awesome looking posters themed to the Mexican holiday the show is aligned with.READ MORE

Forbes, in its ever-continuing goal of providing a list of the world's highest-earning everythings, expanded further by releasing the highest earning "DJs" on Wednesday. Topping the chart, and doing so in dominant fashion, was Scottish producer Calvin Harris. READ MORE