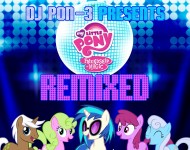 You've heard My Little Pony: Friendship Is Magic's Apple Bloom, Scootaloo and Sweetie Belle (a.k.a., the Cutie Mark Crusaders) sing about their quest to get their special mark on their blank flanks, but until now you haven't heard the foals quite like this. Ahead of the release of the first official MLP EDM album DJ Pon-3 Presents: My Little Pony Friendship Is Magic Remixed, Music Times has an exclusive premiere of Heavygrinder's take on "Cutie Mark Crusaders."READ MORE

The world of Equestria in My Little Pony: Friendship Is Magic has always been filled with music. From the inescapable theme song to bops like "Winter Wrap Up" and "Love Is in Bloom," Twilight Sparkle, Pinkie Pie, Rainbow Dash and friends have always been all about breaking out in song. It didn't take long for My Little Pony to break out of its targeted 9- to 13-year-old girl demo to the world of Bronies, and with that, unofficial EDM remixes of fan favorite tracks have been bumping from convention halls to earbuds all across the world. And now, Hasbro Studios is getting in on the action with the release of DJPON3 Presents My Little Pony: Friendship Is Magic Remixed.READ MORE