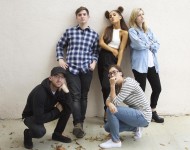 Ariana Grande stopped by the celebrity radio show, "Zach Sang and the Gang," this week for a conversation about her early friendship with Katy Perry, the embarrassment of her old music and her appearance in "Zoolander 2."READ MORE 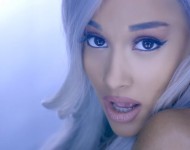 It's been a lot of waiting (and teases) for fans of Ariana Grande, but it's Oct. 30, and that means that "Focus" is finally here. Actually, the new single arrived an hour ahead of schedule, but that's beside the point. The point is, the track is out.READ MORE 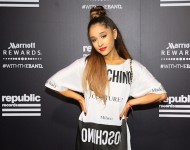 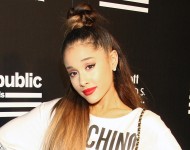 It's been a long countdown, but Ariana Grande's new single "Focus" is finally only three days away. And, in classic pop star style, she's helping to tide fans over in the meanwhile. On Tuesday (Oct. 27) ahead of the Oct. 30 release date, Grande posted a little snippet of her new single along with a little glimpse of its accompanying music video.READ MORE 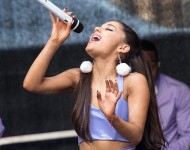 After news broke at the end of August that the music world's current hit makers would put their own spin on Disney classics for a We Love Disney compilation album, Universal Studios producer David Foster further detailed how he got names like Ariana Grande, Gwen Stefani, Fall Out Boy and Ne-Yo to appear on the project and what the song-choice process was like.READ MORE 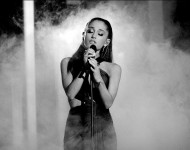 Ariana Grande's new single "Focus" is still 10 days away (not like we're counting), but now fans of the "Break Free" singer have a new taste of the lead Moonlight track, thanks to the latest Ari by Ariana Grande fragrance commercial.READ MORE 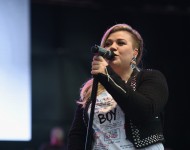 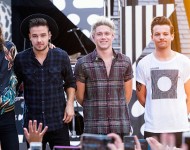 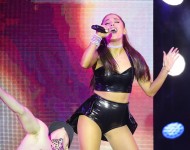 Ariana Grande's rollout for hew new single "Focus" has been a slow one. The pop star first announced the track on The Tonight Show Starring Jimmy Fallon last month and there's been little momentum for it since. But, on Wednesday (Oct. 14), fans finally got a first peek at what's to come... the single artwork. And Grande is sporting a brand new hair color.READ MORE 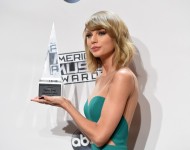 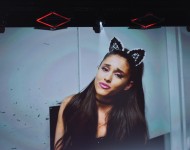 Ariana Grande and fellow actress in 'Victorious,' Liz Gilles, are caught in a kissing video posted by Grande on Instagram.READ MORE 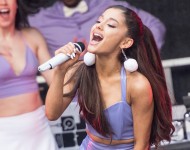 Ariana Grande created a stir this summer when a video of her licking a donut and saying "I hate Americans," went viral, but the singer has seen few signs of backlash on her ticket sales for her Honeymoon Tour run. Secondary tickets for Ariana Grande have seen a 13% decrease since the end of July.READ MORE 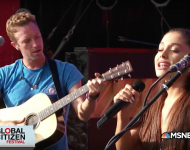 Chris Martin curated Saturday's Global Citizen Festival, which featured headliners Pearl Jam, Beyoncé, Ed Sheeran and the Coldplay frontman's own band all bringing out special guests for their performances. Martin used the stage to debut a new song, "Amazing Day," and performed with Ariana Grande on the track, "Just A Little Bit of Your Heart."READ MORE 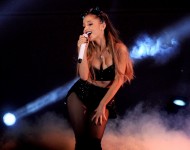 Ariana Grande and Big Sean may have broken up months ago while she was recording her new album Moonlight, but don't expect for the "Focus" singer to tackle the subject on record. In a new interview with her Scream Queens director Ryan Murphy, Grande opened up about her split from her boyfriend and "Best Mistake" collaborator, saying that she has moved on.READ MORE

After being given a clean bill of health and a proclamation of being a "bullet proof b*tch" from her doctor, Ariana Grande has resumed her 'Honeymoon' tour, making a stop in Houston to perform a rendition of Justin Bieber's hit track, "What Do You Mean?"READ MORE