The Masked Singer: 3 of the most surprising reveals

To relive the fun of not knowing who the masked celebrity is, here are three of the most surprising "The Masked Singer" reveals.READ MORE 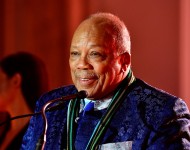 Quincy Jones Apologizes For 'Silly' Statements, Thanks Daughters For Calling Him Out

Quincy Jones acknowledged the fact that he has offended a lot of people during his recent interviews. He apologized to them via his social media account.READ MORE 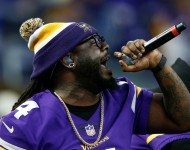 WATCH: T-Pain Runs Away With The Bride In ‘May I’ Video

T-Pain released the music video he directed, edited, and wrote for the song 'May I' in time for Valentine's Day. It has been a while since the rapper released new material.READ MORE 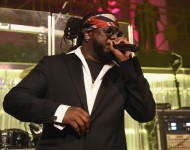 T-Pain: ‘It Just Seems Like Quincy Jones Is Pissed Off At The Whole World’

T-Pain and Quincy Jones recently criticized each other. The music producer claimed that he was unhappy with T-Pain's version of 'P.Y.T.,' and the rapper said that Jones did not help him out at the studio.READ MORE 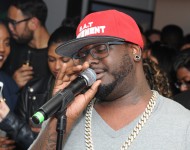 T-Pain is asking for the public's help regarding the apprehension of Tavon Jackson, the man identified by police officers as the suspect in the killing of Javona Glover, the rapper's niece. Glover died from her stabbed wounds on Tuesday in West Tallahassee.READ MORE 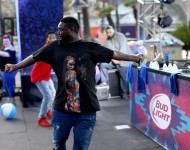 T-Pain's 'Officially Yours' Lyric Video Could Contain Your Wedding Footage

Whether he is in love with a stripper or a bartender, T-Pain has always been a hopeless romantic. He is now allowing others to channel their love through him with his new lyric video for the romantic slow-jam "Officially Yours." Fans are now able to submit footage from their weddings to T-Pain for the opportunity to be featured in the new video.READ MORE 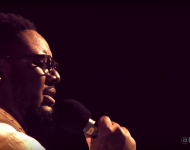 A year ago T-Pain took to NPR's Tiny Desk Concert series and shocked the world when we discovered he could actually sing beautifully without his usual heavy use of Auto-Tune. Now, he's back at it again performing songs from his catalog and covering Sam Cooke.READ MORE 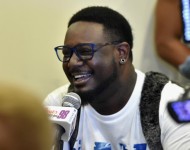 Rapper, songwriter and producer extraordinaire, T-Pain stopped by Andy Cohen's 'Watch What Happens Live' alongside Kenya Moore, serving as the playhouse's special guest for the evening. During the show, T-Pain named Diddy as the most difficult artist he's ever worked with when a fan called into inquire about the hitmaker's experience in the studio with different acts. Although T-Pain was quite respectful with his response, he didn't waste anytime with naming the business mogul as his most challenging task to date.READ MORE 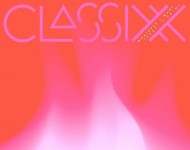 In one of the more unlikely collaborations seen in quite some time, Los Angeles disco and house producing duo of Tyler Blake and Michael David, better known as Classixx, have teamed up with T-Pain to release a brand new song "Whatever I Want."READ MORE 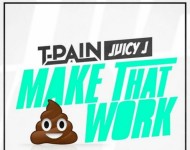 T-Pain, Juicy J Team Up For 'Make That Sh*t Work' Ahead of New Album

T-Pain has been putting in some serious work as of late. With his new album in the works, the Tallahassee rap crooner found time to team up with Juicy J for his new single "Make That Sh*t Work."READ MORE 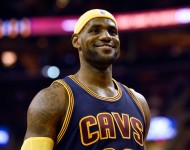 Tonight the Cleveland Cavaliers and LeBron James will go up against Steph Curry and the Golden State Warriors for the first game of the NBA championship. To get revved up for the series, Music Times has assembled hip-hop songs about each of the respective teams, as few musicians get as amped for their local sports teams as rappers (the number of songs/mixtapes named "Beast Mode" after Marshawn Lynch is astounding). We'll start with the Eastern Conference and Cleveland, perhaps ground zero for the hip-hop-meets-harmony movement thanks to the city's much loved Bone Thugs.READ MORE 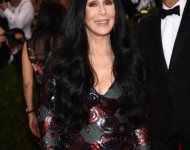 Cher recently took to Twitter to share her experience at the 2015 Met Gala. She tweeted about an encounter with Kanye West, saying that he thanked her for popularizing autotune.READ MORE 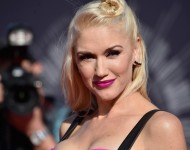 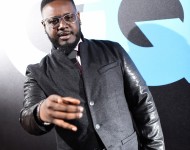 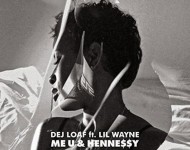 Dej Loaf's already sexy track, "Me U and Hennessy," just got a lot steamier with the addition of Lil Wayne, who lays down a sultry verse. The collaboration was teased a few days ago when the music video was released and as the visuals came to a close, Lil Wayne's voice came into focus for a few seconds. Fans did not have to wait long to hear the final product with Weezy getting a lot more sexual than we have heard from him in quite some time.READ MORE